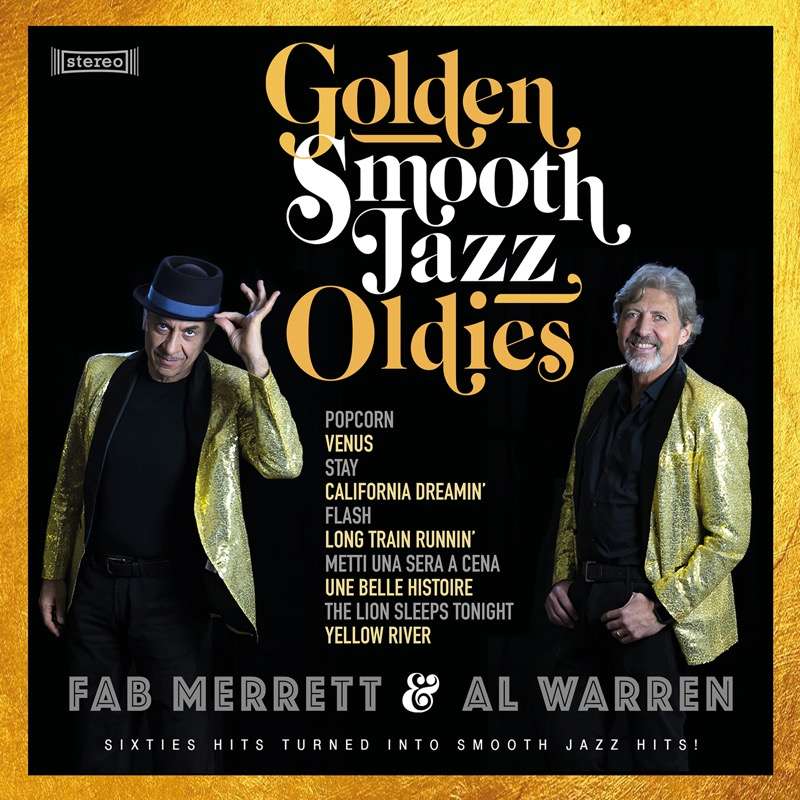 Out on Friday 8 July 2022 with Preludio is 'Golden Smooth Jazz Oldies', a highly original project by Fab Merrett & Al Warren.

Fab Merrett e Al Warren are two talented professionals who love playing music in the smooth jazz style. Fab (aka Fabio Mereghetti, piano), who with his band Cherry Pickers records and plays live around Europe, is actually a creative director, while Al (a.k.a. Alberto Guariglia, guitar), is a studio artist for several bands and is a doctor in life.

They have known each other since they were very young and their passion for music has always united them. Although they had often played live together, they had never recorded any studio material. The lockdown was an opportunity to recover and consolidate some ideas and arrangements from past years, create new ones and realise GOLDEN SMOOTH JAZZ OLDIES - Sixties Hits Turned into Smooth Jazz Hits.

The album brings together internationally famous hits from the 1960s, but also perhaps somewhat forgotten hits from the same period that today's audiences can rediscover in these versions by Merrett & Warren.

The novelty of GOLDEN SMOOTH JAZZ OLDIES is that most of the songs have never been revisited by artists of the smooth jazz genreThis is precisely why some of the tracks on the album, which have always been considered only pop hitscould now be considered as new jazz standards. In addition, recognising the original songs in this new guise is not always straightforwardand the listener is often pleasantly surprised.

The arrangements of the tracks on the album are very creative, distinctive and sometimes unexpected. Efficiently orchestrated, with sumptuous strings, sax, trumpet, guitars, keyboards, and reharmonised in a smooth jazz style, the tracks are mainly instrumental and see Fab Merrett and Al Warren alternating in theme melodies and solo parts.

The instrumental pieces are flanked by some sung tracksfeaturing the singer/songwriter Dagmar Segbers with his charming voice in Venus, Say one night at dinner e Stayby the British duo Dukes of Burlington - behind whom the rappers are hiding Tyson & Emery - in Flashand the Italian a cappella group the ALTI & BASSI at The Lion Sleeps Tonight.

The album tracks were recorded remotely during the pandemic, with the musicians in their respective studios in Italy and abroad. Achieving the desired end result was a challenge, brilliantly overcome thanks to the skilful mixing of the sound engineer Pippo Muciaccia which created a compact and captivating sound, emphasising the excellent interplay between the musicians, who shared the same feeling and taste.

All arrangements and production are by Fab Merrett e Al Warren.

The musicians on the album are Sergio Quintero Garcia to the bass, Fabio Good on drums/percussion, Stefano De Palma on sax and Carlo Fontana to the trumpet.

The album, on the Preludio label, is available on all digital platforms and on a limited edition CD on preludiomusic.com.

Popcorn, a simple electronic track played only by synthesisers and which became a worldwide success also used in some of the earliest video games, with Merrett & Warren takes on atmospheric loungewith an advanced harmonisation that twists and enriches the simple original chords. The theme is carried by the electric piano that plays with a meandering electric guitar, a strong bass, together with an acoustic and an electronic groove that complement each other perfectly, on a carpet of pads and strings that make the whole thing soft.

Venus is a song with an atmosphere jazz soul in which the entire rhythmic part, supported by the guitar in the original Shocking Blue version, is held up in this Merrett & Warren version by the piano. Saxes, violins, 60s-style guitars and choirs provide the backdrop for the sensual performance and vocals of Dagmar Segbers.

Stay is a doo-wop song written by Maurice Williams and first recorded in 1960 by Williams with his group The Zodiacs. Over the years it has spawned many covers by different artists, but now Merrett & Warren have arranged and reharmonised an unusual version smooth jazz of this piece as no one had done before. The result is alounge atmosphere, a groove jazz, enveloping strings, scratchy brass, guitar and piano solos, and on top of all this the fascinating voice of Dagmar Segbers.

Flash,a 1968 English song by the Marques of Kensington that went almost unnoticed, became an international instrumental hit when it was recorded the following year with overdubs by Italian multi-instrumentalist Mario Battaini, a true forerunner of Mike Oldfield. In this version by Merrett & Warren all groove, rap e funky, Tyson & EmeryThe Dukes of Burlington, show off their rap and beat-box vocals in an engaging crescendo.

Long Train Runnin'is the classic minor blues of the Doobie Brothers that Merrett & Warren repropose in a version bossanovaThey were inspired by Claus Ogerman's arrangements of Diana Krall's Brazilian songs and Jobim's early arrangements: a real challenge for a song like this, which is characterised by the guitar riffs that Merrett & Warren manage to maintain even in the bossanova version, enriching the arrangement with strings, flute breaks, acoustic guitars and piano.

Say one night at dinnera classic of Ennio MorriconeMerrett & Warren's version is characterised by a more complex and fragmented rhythmic base, with the drums increasing the groove with each repetition of the singing, making the song more interesting, which only in the finale picks up a Brazilian rhythm echoing the original. Sumptuous strings and acoustic guitars frame the limpid voice of Dagmar Segbers.

The Lion Sleeps Tonight is inspired by the style of David Foster and Brian Culbertson for the arrangements and the piano that drives the melody, in an atmosphere characterised by South African choruses and the famous riff of the refrain performed here by the a cappella group ALTI & BASSI. The middle section then becomes tribal, with piano and guitar solos leaning against a kalimba-driven rhythm over a groove of drums and percussion.

Fab Merrett & Al Warren's 'Golden Smooth Jazz Oldies' is released with Preludio.
The album brings together covers of famous international hits from the 1960s, but also hits from the same period that are perhaps a little forgotten, which today's audiences can rediscover in these Smooth Jazz versions by Fab Merrett & Al Warren.
Download the PRESS KIT!

Find out who Fab Merrett & Al Warren are