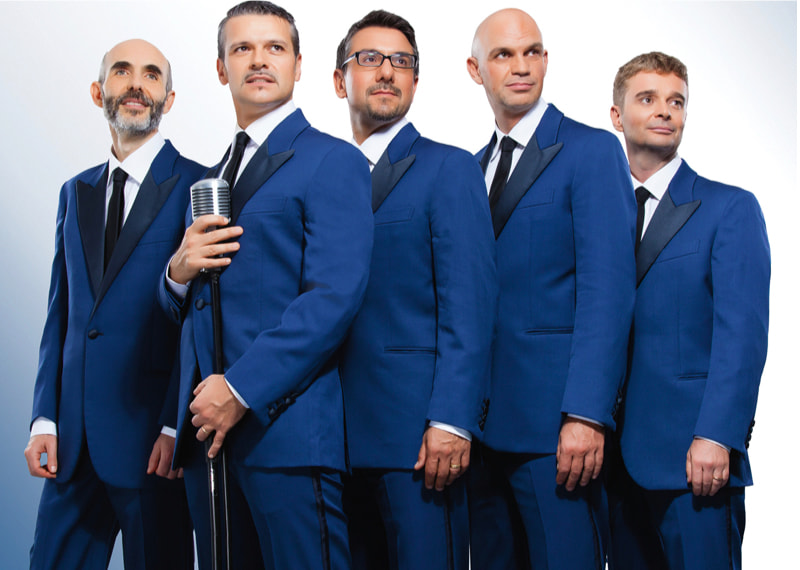 The ALTI & BASSI are an a cappella vocal quintet founded in 1994 in Milan. In recent years they have performed an intense concert activity invited by organisations, associations and institutions. They have been guests of I Musical Afternoons of Milan, of the exhibition Nocturnes a Villa Simonetta and the Sforzesco Castle in Milanof the 40s/50s Italian Song Festival at the Royal Palace in Turin, the Umberto Giordano Festival in Baveno (VB), of the Sanremo Festival of Jazz Songs in San Remo, of theS.Tempia Choral Academy at Turin Conservatoryof the music marathon "Music is for everyone' organised by Amadeus in the Verdi Hall at Milan Conservatory, of theMessina Philharmonic Academy at the Teatro Annibale di Francia, of The Light Museto theHaydn Auditorium of Bolzano, of Theatre of the Muses of Ancona, of Manzoni Theatre by Pistoia, of Saschall Theatre by Florence, of the exhibition Visioninmusica to theGazzoli Auditorium by Terni, of Concert Season of Rossini Theatre by Pesaro (2008 and 2015), of theRoman Philharmonic Academy at Argentina Theatre at Rome, de Music and the wind in Pantelleria (2007 and 2010), of theInternational Accordion Festival of Castelfidardo, of Negro Festival of Pertosa (SA), Concerts in the Park in Rome (2010 and 2017). They were guests at the fifth edition of MI.TO. September Music 2011 at the Filodrammatici Theatre of Milan. In 2016 the Cucinelli Foundation invited them to give a concert in Solomeo (PG) at theCucinelli Amphitheatre for the Villa Solomei Festival 2016. In September 2018 they sang for the President of the Republic Sergio Mattarella at the Presidential estate of Castelporziano (Rome). In 2022, they were invited to Apulia and Salento for three concerts, including one at the Apollo Theatre in Lecce for the Camerata Musicale Salentina. Since 2002, every year they have been guests of the Blue Note.

They gave voice to several advertising jingles (Pagobancomat, Auchan,...) and television acronyms such as Perepepé, Gene Gnocchi's programme on RAI Due, the acronym "Pausette" and some Christmas theme songs from The Seven, 'The Cows for HER and the end theme song of 'Un amore di strega', a Channel 5 drama starring Alessia Marcuzzi, later filmed for the film 'University students".

Numerous television appearances including Good Vibrations at Tele+3, Roxy Bar at Videomusic, Good Sundayconducted by Lorella Cuccarini in 1996 and, in 2006, guests of Maurizio Costanzo a Every Morning at Channel5, At two o'clock on RAIUNO conducted by Paolo Limiti. La Swiss Italian TV invited them as guests on the programme Beatles 4Ever. They were guests of the Telethon Marathon 2009 at Rai Oneconducted by Milly Carlucci e Fabrizio Frizzi. In 2015, they returned to television by participating in the programme Community broadcast on Rai Italia, while in 2017 they participate in Channel 5 a The Winner is conducted by Gerry Scotti. In May/June 2018 they participate in Nino Frassica a Che Tempo che Fa at Rai 1led by Fabio Fazioproposing the living a cappella theme song of the Novella Bella magazine.

Around a radio microphone: Rock FM, Swiss Italian Radio, Classic Radio, "Nick & The NightFly" on RadioCapital e Monte Carlo Night at Radio Monte Carloconducted by Nick The Night Fly, 'Kitchen' on Radio Deejay conducted by AndreaPezzi, Caffelatte news with Paolo, Lester and Alfonso Signorini on Radio Monte Carlo. They were interviewed by Lifegate Radio, 101, Radio RAI Uno e Radio RAI Trewere guests of the "Italian Nocturne"of Radio RAI International and of Grammelot e Verdi Square live on Radio RAI Tre. Radio FMPalermo by Buenos Aires has dedicated numerous specials to Highs and Lows. In 2006 Fiorello broadcast some tracks from the MEDLEY album during two episodes of Long live Radio TWO. In 2015, they were guests at the Radio Rai 3 holding a one-hour concert live from the Church of San Giacomo Apostolo in Forlì, hosted by Stefano Roffi. Since 2016 they have been guests of Nino Frassica a "Programmone" on Radio Rai 2 and in July 2017 they gave a concert together with Frassica at the House of Jazz in Rome. Since September 2016 they have conducted "Highs and lows ONDERADIOthe ups and downs of Music"every Saturday at 4 p.m. on the frequencies of NETWORK ONE of Swiss Italian Radio.

They have been invited to international festivals such as Voice Mania 1998, 2000 e 2006 a Vienna, A Cappella Festival in Zug (Switzerland), Pure Voices in Katzeldorf / Leitha and Vokal Total in Graz (Austria 2008 and 2017), Suha Festival in Dravograd (Slovenia) and In Cappella in the Ljubljana Castle (Slovenia); the Swiss Italian Radio invited Alti e Bassi to Locarno and to the 'Midsummer Night' party in Mendrisio. In December 2014, they starred in a concert at theItalian Cultural Institute Abroad by Budapestpreceded by a performance at the Budapest Jazz Club. In May 2016 they opened the fifth edition of the Girona A Cappella Festival and were guests of the House of Italians by Barcelona. In July 2016 they were guests at theInternational Choral Celebration by Budapest holding two performances at the MUPAthe Palace of Arts in Budapest. In 2017, they were invited by the Italian Consulate in Izmir (Turkey) to represent Italy at the Izmir International Festival. They were invited in October 2018 to hold a tour in Taiwan with 16 concerts in the island's major theatres and universities.

They were assigned to the ALTI & BASSI the Cetra Quartet Prize '98 and the Carosone Award in 2006. In 2015, the new album 'La Nave dei Sogni' was awarded two nominations at the DEAR in Boston (USA), the most important worldwide award dedicated to a cappella music, as Best Jazz Album e Best European Album winning second place as Best Jazz Album. In January 2016 came the important recognition The Accademia Music Award awarded in Los Angeles to 'La Nave dei Sogni' as best a cappella song. In 2017 they came third in the a cappella festival Vokal Total 2017 in Graz (Austria) in the Pop category, also achieving fourth place and silver diploma in Jazz. In November 2017, they won the Audience Award on the first evening of theItalian A Cappella Summit as part of the Festival Vivavoce in Treviso. In October 2018, they came third at the World Competition a Taipei 2018where they won four first prizes: 'Best Jazz Interpretation', 'Best Singer', 'Best arrangement' and 'Best Original song'.

A Capella Made in Italy Christmas – Vol 1

A Cappella Made in Italy – Vol 1

When the Saints Go Marchin’ In