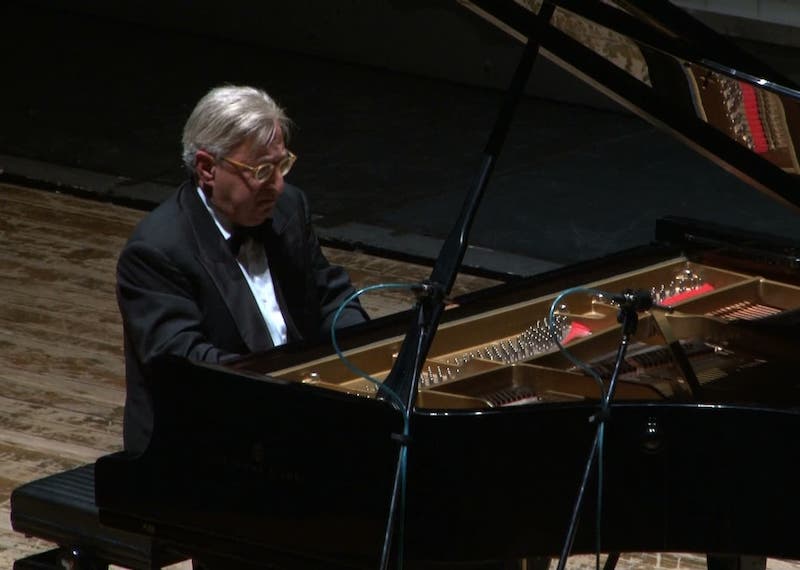 Born in Genoa in 1951, he completed his musical studies in his hometown under the guidance of Alfredo They and Martha Del Vecchio, graduating in piano and composition. Considered one of the most representative pianists of his generation, he has performed in many important theatres and concert halls around the world: Konzerthaus in Vienna, Barbican Hall in London, Teatro Alla Scala in Milan, Teatro Colón in Buenos Aires, Herkules Saal in Munich, Gewandhaus in Leipzig, Salle Gaveau and Cité de la Musique in Paris, Victoria Hall in Geneva, Tonhalle in Zurich, Auditorio Nacional in Madrid, etc., He has collaborated as a soloist with some of the most prestigious international orchestras, and has participated in numerous festivals such as: Maggio Musicale Fiorentino, Venice Biennale, Festival dei due Mondi in Spoleto, Berliner Festwochen, Holland Festival, Wien Modern, Donaueschingen, Zagreb Biennale, Festival d'Automne in Paris, Penderecki Days in Yerevan (Armenia), Penderecki Festival in Warsaw, Festival Paìz in Antigua (Guatemala), Takefu Music Festival (Japan), etc.

In addition to countless recordings for various European and American radio and television networks, he has recorded for many record labels, including: EMI, Etcetera, Arts, Brilliant, Koch, Ricordi-BMG, Accord, Naxos, Col Legno, Da Vinci, Dynamic, Musikstrasse, Tactus, Warner, IMD, MAP and The Library Classics, for which he is currently recording Beethoven's 32 Sonatas.

He is also very active as a composer and has presented several of his works at major festivals with great success.

Italian critics awarded him the prestigious 1992 Abbiati Prize as concert artist of the year.

Nicholas Kenyon, in the Times of London, called it absolute master of keyboard and soundfamous composer Elliott Carter, after hearing him in New York, said of him: Each of his concerts is an unforgettable experienceand after his recital in Munich in 1997, the Süddeutsche Zeitung called it one of the three greatest Italian pianists of our time, with Benedetti Michelangeli and Pollini.

Soundtrack for a Fancy Movie