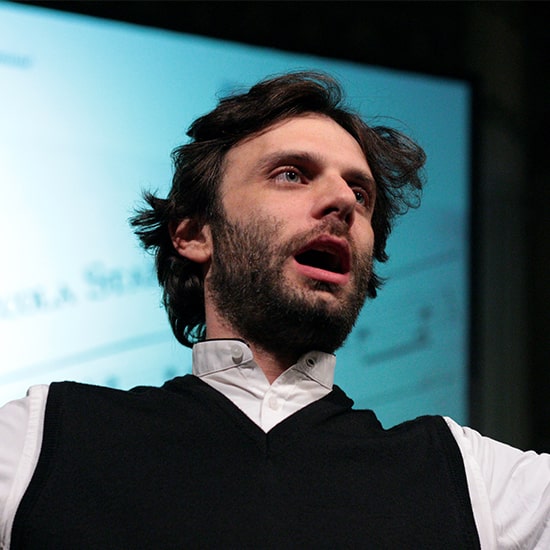 Ludovico (Dodo) Versino was born in Rome in 1982, and from an early age developed a great passion for acting on the one hand and choral singing on the other. His mother is a dubbing assistant for C.D.C., a historic dubbing company, while his father is a travel agent for American Express, but in his spare time he is also a chorister in COROANAROMA, whose concerts he never misses.

During his childhood he studied classical piano with the very patient teacher Aldo Ragone and at the age of sixteen he joined the choir. Harmonic Entropies as a bass guitarist. In his spare time he goes to school: elementary and middle school at the Scuola Socrate, high school at the Liceo Classico G. De Sanctis in Rome.

When he came of age, he embarked on a career as an actor, studied acting and diction with Antonio Sanna, took part in a number of theatre productions and, since 2007, has been working (and living happily) as a voice actor, playing the most bizarre and disparate roles in films, TV series, cartoons and documentaries. At the same time, he began playing keyboard in a tribute to the Doors, i Burning Bright. In 2003 he founded the a cappella vocal septet Anonymous Harmonistsof which he is bassist, arranger and string puller. In 2006, he graduated from DAMS, began to study singing seriously with Maestro Adriana Giunta and, together with his brother Michele, founded the Cantering Choir, a choral group of young people inexplicably specialising in Italian popular music. Since 2010 it has been organising the VokalFest, a gathering of youth vocal music. In 2011 he joined the board of ARCL (Associazione Regionale Cori del Lazio). In 2013 he made his debut as a soloist in a tribute to Fabrizio De André, Different Peoplehe studied choral conducting with Maestro Claudia Gili and was asked to conduct the newly founded Hill Choirhis first mixed choir for adults in the Bufalotta district. That year also saw the birth of theCultural Association Decantowhich brings together all its choral and vocal ensembles in order to 'exist' legally, fiscally and organisationally.

Meanwhile, in 2014, he created the Tiny Vocal Space, a mixed group of twelve particularly nerdy elements. In 2015 he started a new outstanding youth choir: the Grifoncoro. In 2016 he opened in the EUR district the Ginger Choirbecause 'the Hill is too far away for those in southern Rome'. In 2017 he founded the vocal quintet Eyes Closed in Open Sea. In 2019 it also gives birth to the choir that is not therea huge group of 90 young people from the choirs of the above-mentioned high schools. This choir achieved unprecedented success, even becoming known in the United States for a video made during quarantine. And it was also during quarantine that it created the TELECORE, an online music school with various subjects (solfeggio, harmony, arrangement, ear training, beatbox, etc.) created with the aim of keeping choristers together during the period of social distancing.

In the meantime, he continued his career as a voice actor, and after years of dubbing "those who die immediately", he was gradually given more important roles, until he was able to dub recognisable characters in some films, TV series and cartoons. While he's at it, he also does some questionable TV commercials.

The Sound of Silence

When I Need a Friend (A Cappella SATB)