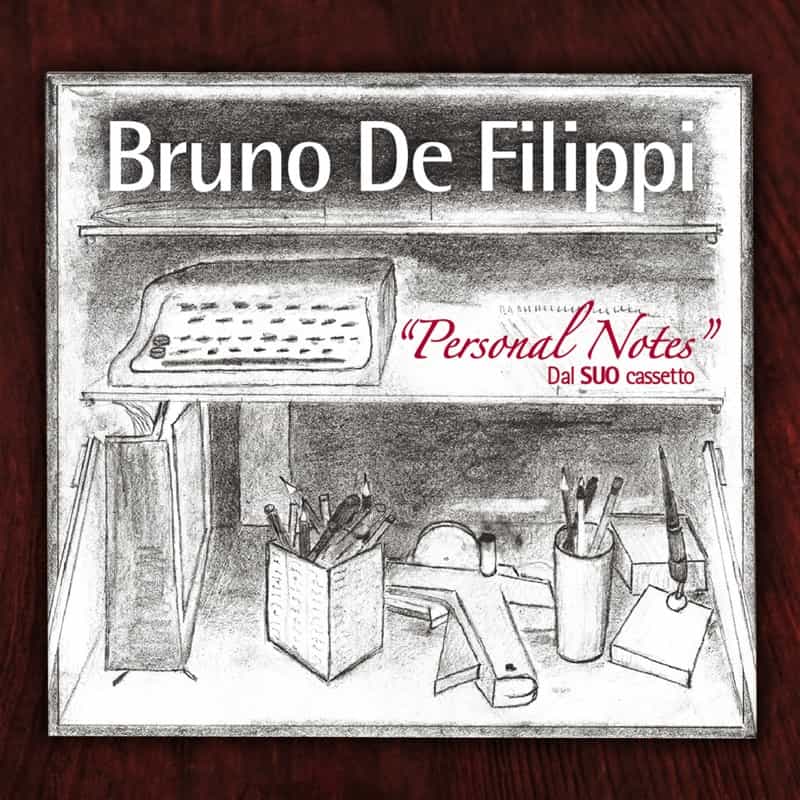 'Life is colourful" of "The Champions"from the album ".Personal Notes - from HIS drawer"of Bruno de Filippihas been chosen for a scene in the fourth episode of the sixth series of "Better call Saul"on Netflix.

Personal Notes - From HIS drawer brings to light 12 pieces composed by Bruno De Filippi. Some of them are remastered from old recordings recovered from vinyl or audiocassettes, such as "Dammi il numero di telefono", "Acqua in bocca" or "A Sanremo"; others have been produced from scratch, reconstructing them from the original autograph scores, such as "Duas Canoas", "Quando, non lo so" or "Lullaby for Alice" (written for the birth of his granddaughter and here interpreted by Max De Aloe's harmonica).

A photograph of De Filippi with a young man also emerges from that drawer. Adriano Celentano while they rehearse one of the tracks on the tracklist, the energetic 'Movimento di Rock', performed on the CD by Celentano himself. In short, a return to the past, to the fabulous 60s, with nostalgia for the sounds and creativity of an era that made Italy famous throughout the world. The CD booklet is a delightful collage of memories and clippings that Franca De Filippi, with dedication and affection, has kept and wanted to recover in memory of her father.

Bruno De Filippi was born in Milan on 8 May 1930 and devoted his entire life to his work as a musician and composer. Known for being the author, together with Franco Migliacci, of the song 'Tintarella di luna' performed by Mina, Bruno De Filippi is an all-round musician. In a short time, as a guitarist and harmonica player, he found himself collaborating with jazz musicians from all over the world: Louis Armstrong, Barney Kessel, Toots Thielemans, Bud Shank, Bill Russo, Gerry Mulligan, Astor Piazzolla, Les Paul, Chet Baker, Lionel Hampton, Lee Konitz and many others; in Italy he collaborates with Franco Cerri, Enrico Intra, Renato Sellani and on the pop side with Mina, Adriano Celentano, Johnny Dorelli, Ornella Vanoni, Enzo Jannacci, Caterina Valente...

Personal Notes - From HIS drawer

Personal Notes - From HIS drawer brings to light 12 tracks composed by Bruno De Filippi, guitarist and harmonica player, author of Tintarella di Luna and known for his collaborations with Mina and Celentano.

"We are proud to have revived this master's degree on the initiative of our daughter Franca De Filippi, - says Andrea Thomas Gambettisole director of Prelude – We would like to thank the producers as well as the music consultants of the Netflix series "Better call Saul", a TV series that has already shown great attention to music, never put on at random and of great quality, for having chosen this song by "I Campioni" to soundtrack a scene of episode 4. The success of the TV series demonstrates how important it is today to take care of every detail and not to neglect what is undoubtedly one of the fundamental components of everyday life, i.e. music.“.

Better Call Saul is an American television series created by Vince Gilligan and Peter Gould. It is a spin-off and prequel to the series Breaking Bad. It focuses on lawyer Jimmy McGill / Saul Goodman, played by Bob Odenkirk. The first episode aired on 8 February 2015 on AMC, making it the highest-rated premiere ever for cable TV. The series in which Bruno dDe Filippi's track appears is episode 6, in episode 4, at about minute 29.

The synchronisation division of Prelude is a music consultant for advertising, television and film. It has a platform with more than 54,000 music tracks available. In addition to Production Music https://www.preludiomusiclibrary.com also offers discographic content, independent productions and numerous covers. The entire album 'Personal Notes - from HIS drawer' is available for advertising, TV or film synchronisation.

Discover the album "Personal notes - from HIS drawer".