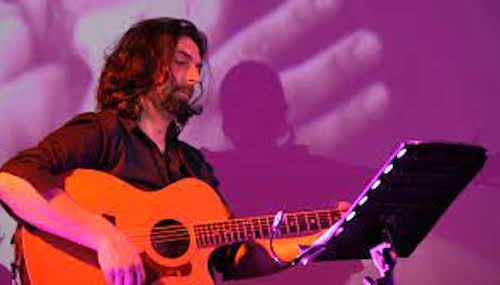 He began studying guitar privately with a teacher from Arzignano (Vicenza), his home town, at the age of 14. He then went on to become self-taught, approaching the world of rock guitar. At the age of 17 he met jazz music: he attended the Thelonious School in Vicenza, studying jazz for four years with Michele Calgaro and then perfected his skills in Milan with maestro Danilo Minotti. He took part in numerous seminars: acoustic guitar with Franco Morone (2005, 2007, 2008 and 2009), jazz guitar with Tommaso Lama and Garrison Fewell (2007), use and construction of sound and effects with Massimo Varini (2009), pop rock guitar with Chicco Gussoni (2009 and 2010). From 2014 to 2015 he studies regularly with Ruggero Robin. Since 2018 he studies ear training with Francesco Villa. From 2003 to 2010 he devoted himself to teaching. Among his many collaborations (Danilo Minotti's Pop Orchestra, Elio, Paola Folli, Vittorio Matteucci, Ambra Marie Facchetti), two important experiences with the rock group Terzo Capitolo are worth mentioning: the re-proposition of the concert performed by PFM with Fabrizio de Andrè and a theatre project dedicated to Gaber. His encounter with the music of the Pat Metheny Group, Mike Stern and fusion is the spark that gives rise to his desire to compose original music. In 2006 he formed a jazz-fusion trio under his own name, Mecetrio. In 2010, a new piano player was added to the trio and the line-up became Mecequartet, ever closer to the fusion style of Pat Metheny, John Scofield, Herbie Hancock and Chick Corea. In 2011 he released his first self-produced album of instrumental jazz fusion music, UPWARD, with eight original tracks, an album that marked the beginning of his collaboration with percussionist Valerio Galla. Since 2012 he has formed a double bass and classical guitar duo with double bass player Joy Grifoni that plays, in addition to the duo's original pieces, reinterpretations of pieces from the album "The Missouri Sky" by Pat Metheny and Charlie Haden. In 2015, Valerio Galla's percussions were added to the Mecequartet, giving life to the definitive Maurizio Mecenero Quintet. In 2015 he released his second self-produced album, SECRETS OF LIGHT. In October 2019 he releases his third album, INSIDE DREAMS, on the Milanese label Preludio. The main characteristic of Maurizio Mecenero's playing is versatility and the fusion of many different styles and genres: Mecenero plays with his fingers a la Mark Knopfler, passing through phrasing a la Pat Metheny and Mike Stern or 70s rock, or even the classic octave style of Wes Montgomery. Mecenero says: "For me, jazz is not a lesson in style, but the way Davis left it to us, his sound and his improvisation in a mixture of different cultures and genres". www.mauriziomeceneroquintet.it