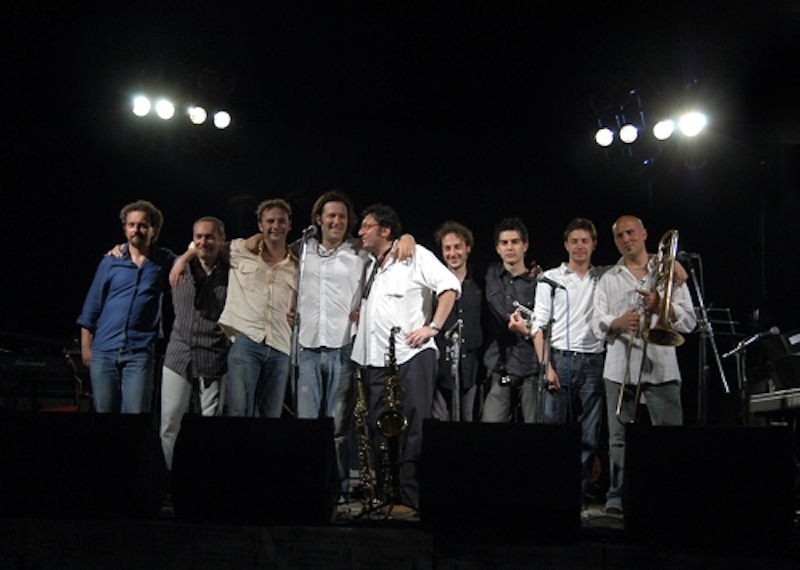 "F A V O N I O" is a group of artists who, after playing for years in different realities, have concentrated their experiences and sensibilities in the creation of songs of their own composition. The musical project, which takes its name from a typical wind that blows through the arid countryside of the province of Foggia, was born in 2002 out of a great passion for Italian singer-songwriter music. The components of the group have come to "FAVONIO" at the end of a long journey that over the years has seen them as protagonists of the music of their land dealing with various genres of music, from rock to pop music, from jazz to blues, from Latin to funk ... The members of the group are: Paolo Marrone (singing, acting and poetry) Mimmo Petruzzelli (sax and whistle) Lucio Pentrella (acoustic and electric guitars) Stefano Capasso (piano, whistle, hammond, rhodes) Giovanni Mastrangelo (electric bass and double bass) Piernicola Morese (percussion) Giuseppe Guerrieri (drums) Antonello Del Sordo (trumpet) Fabio Contillo (clarinets and sax) Roberto Solimando (trombone) The first pieces were proposed by Mimmo and Paolo and later on Lucio's songs and some covers (Piero Ciampi, Sergio Endrigo, Paolo Conte, Fabrizio de André, Giorgio Gaber...) were added.). The project is constantly evolving thanks to the fundamental contribution, in the arrangements of the pieces, of all the musicians and the participation of some guests including Alfredo Ricciardi (Indian tablas) and Michele Carrabba (sax). July 2003: semi-finals of the "Festival di Castrocaro Terme". - September 2003: finals of the national "Spazio Giovani" festival, with the "Gazzetta del Mezzogiorno" prize (www.spaziogiovanifestival.it) and the right to enter the festival compilation with the song "Dolcevita". - March 2004: concert at the "U. Giordano" theatre in Foggia, on the occasion of the presentation of a compilation containing the song "Dolcevita". - June 2004: first place at the "Bologna Music Festival", awarded by maestro Fio Zanotti, president of the jury, after having been at the top of the quality and popular rankings for several months (www.bolognamusicfestival.it) - June 2004: music for the show "I voted for Hitler", adaptation of "Terror and Misery of the Third Reich" by B. Brecht at the "Leonardo" theatre in Foggia. Brecht at the "Leonardo" theatre in Milan, directed by Brunella Andreoli - August 2004: participation as guests at the international prize "Argos Hippium" organised by the Sporting Club of Siponto - September 2004: participation in the national festival "Spazio Giovani" with the Roman singer-songwriter Paolo Pallante (www.paolopallante.com), who reached the finals and won the "RadioNorba" prize - December 2004: participation in the final stages of the festival "Risonanze 2004" (www.associazioneexperimenta.it) in Villafranca Padovana - October 2005: concert at the 1380 art gallery in Milan - December 2005: participation in the final selections of the "Un giorno insieme - Augusto Daolio" award (Sulmona) and F.I.M.I. (Federazione Industria Musicale Italiana) plaque for "Migliore Musica" (www.fimi.it) - May 2006: participation in the final stages of the "Giovani Suoni" festival with a performance at the Palapartenope in Naples - July 2006: first prize in the "Che fine ha fatto Fanii?"held in San Vito dei Normanni (BR) and dedicated to the memory of the great singer-songwriter Franco Fanigliulo - July 2006: release of the first single "Dolcevita", produced by the Bolognese record company "AM Productions", also containing a remix version of the song and with the extraordinary participation of saxophone maestro Michele Carrabba - October 20, 2006: concert at "La Fabbrica del Vapore" in Milan - October 21, 2006: afternoon concert at the "1380" art gallery in Milan - December 31, 2006: concert at Masseria S. Agapito in Lucera (FG).Agapito in Lucera (FG) - February 2007: recording of the first album, soon to be released, at Mauro Pagani's "Officine Meccaniche" studios in Milan, with mastering at Nautilus in Milan, by Claudio Giussani, and with guests on tenor sax Michele Carrabba, on cello Michela Celozzi - 24 May 2007: concert in Pieve Emanuele (Mi) for the Campaign for the Millennium Goals organised by the UN - 1 September 2007: public performance in Foggia as guests, on the occasion of the tenth anniversary of the event "Spazio Giovani". - 26 September 2007: concert in Piazza Cavour in Foggia for the "Festa dell'Unità". - October 5, 2007: concert in the historic centre of Foggia, at the "Fuori Squadro" for a meeting of senses between music, food and wine quality. - 24 November 2007: concert at the M.E.I. in Faenza. - 1 January 2008: at the invitation of the members, they chose "La Taverna del Gufo" in Foggia as the venue for their rehearsals. (This is a historic jazz venue in the city in the 1970s, where Arnaldo Santoro, Ninni Maina and Renzo Arbore gave life to numerous and applauded shows, calling upon some of the most important emerging artists on the international artistic scene.Today it lives again thanks to the renewed impulse of Ninni Maina and new friends Enzo Audiello and Matteo Iacovelli in the association "I nuovi Amici della Taverna del Gufo" (The new friends of the Taverna del Gufo) with the aim of resuming cultural activities, concerts and promotion of young talents. - 29 January 2008 : The Place in Rome web: www.favonio.it