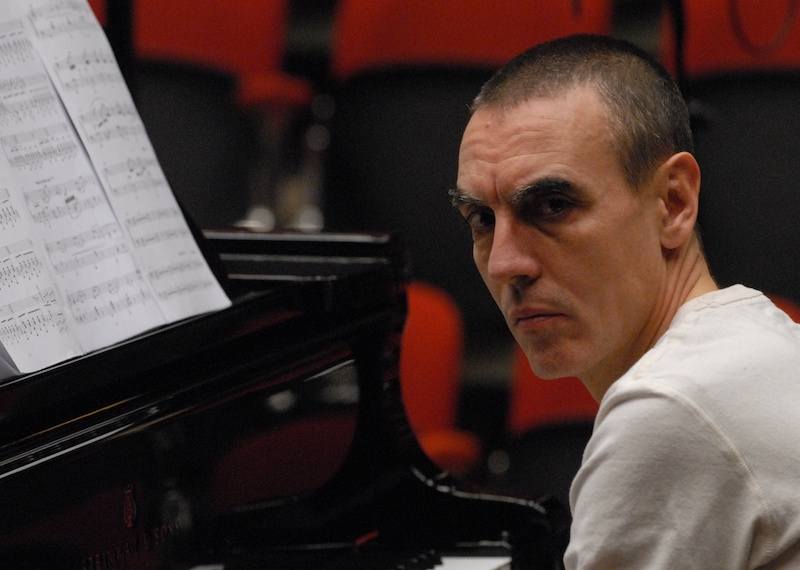 Composer and pianist from Brescia, he began his musical studies in his hometown and completed them at the G. Verdi Conservatory in Milan. One of the founders of the Neoromantic movement, he has been involved for years in research into the fusion of musical genres and cultures (jazz, rock, oriental and Afro-American music, etc.). His compositions have been performed in various important events, festivals and concert venues in Italy and abroad, such as the Venice Biennale, the WDR festival in Berlin and Cologne, the Bath festival, the Rhine festival in Düsseldorf, the Darmstadt Opera, the Italian Music Week in New York, the Warsaw Contemporary Music Week and others. He has received commissions from Swiss Radio, RAI Rome, the Winterthur Orchestra, the Venice Biennale, etc. In 1999 his opera Gradus was premiered at the Teatro Sociale in Rovigo. His compositions have been published by Ricordi and Sonzogno and recorded on CGD records. His reinterpretations of other musical genres in a classical key are very much performed: from rock (the concert entitled Rocklied is a tribute to the Beatles and other sacred monsters from England and America), to film music (Movie Charms is the title of the existing programme in various chamber and symphonic versions that includes the best of Italian and American soundtracks), to Italian songs. In 2002 the programme Made in Italy (the Italian song from 1910-1950), performed by Lucchetti himself with the ensemble '900 e Oltre conducted by Antonio Ballista, was a resounding success at the Teatro alla Scala and on tour in South America in June 2005. In 2003 he founded the group Crossing Over, a transcendent ensemble that performed, among other things, for the season of the Centro Teatrale Bresciano, in the show Terra di Confine (conceived by E. De Checchi and A. Lucchetti), in April 2004 at the Teatro Sociale. His most recent productions include Puccini Forever, a series of fantasies on themes from Puccini's major operas, composed for the ensemble '900 e Oltre on the occasion of the centenary of the death of the great composer, and YOU'RE THE TOP (a tribute to Cole Porter) for soprano, tenor, piano and orchestra, premiered on February 2, 2008 at the Teatro Politeama in Catanzaro and broadcast by RAI 3. From 1987 to 2001 he performed an intense concert and recording activity in piano duo with Pinuccia Giarmanà in Italy (International Piano Festival of Brescia and Bergamo, RAI and Unione Musicale of Turin, Istituzione Universitaria Concerti of Rome, Musica nel nostro tempo of Milan, Filarmonica Laudamo of Messina, etc.); in Switzerland (Concerts of the Radio and Congress Palace of Lugano, Schloss Konzerte Thun, St. Moritz Piano Festival etc.); in Germany and Belgium. The duo has collaborated with the Coro della Fenice in Venice (Rossini's Petite Messe Solennelle); with the Athestis Chorus (Brahms' Liebeslieder and Neue Liebeslieder) and with I Percussionisti della Scala (Bartòk's Sonata etc.). The Giarmanà-Lucchetti duo has recorded CDs of works by Busoni (Nuova Era), Chabrier's complete works and Liszt's music (2 CDs Gallo), as well as Grieg's complete works (2 CDs Stradivarius) and recorded Messiaen's Visions de l'Amen for Swiss Radio. On that occasion Yvonne Loriod-Messiaen wrote of them that they are "a superb duo, exceptional in technique, expression, sound and ensemble!". Since 1989 he has been teaching at the Luca Marenzio Conservatory in Brescia.