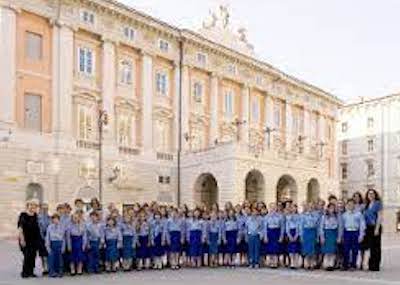 The boys' choir I Piccoli Cantori della città di Trieste was founded in 1976 by Prof. Maria Susovsky and is part of the Academy of Music and Choral Singing of Trieste. The choir has won prizes in national and international competitions including: Arezzo, Prato, Neerpelt, Nantes, Bratislava, Llangollen. It has toured Austria, France, Czechoslovakia, Belgium, Hungary, Wales, Switzerland, Germany, Spain and the Czech Republic, Italy and the region, and has supported more than a thousand charity concerts, choral festivals. He has also been invited to Minsk, Belarus. He has recorded for RAI, Radio Koper, TV Ljubljana, Dutch and Belgian Radio and various television stations.

He has collaborated and still collaborates with the Fondazione Teatro lirico G. Verdi di Trieste in opera productions such as: Carmen by Bizet, Werther by Massenet, Haensel and Gretel by Humperdinck, the Damnation de Faust by Berlioz, Boheme, Tosca, Turandot, Sister Angelica e Gianni Schicchi by Puccini, Joan of Arc at the Burning of Honneger, Wozzeck by A.Berg, Der Rosenkavalier by R.Strauss, Boris Godunov by M. Mussorgsky, Othello by G. Verdi, Murder in the Cathedral by I. Pizzetti, Pagliacci by Leoncavallo; and in operettas: Countess Maritza of Kalman, Ball at the Savoy by P. Abraham, Orpheus in Hell by Offenbach and in the musical Elisabethperformed in the setting of the Miramare Castle. In the symphonic seasons the choir performed: Carmina Burana by C. Orff, on War Requiem by B. Britten, the Third Symphony by G. Mahler, the Fourth Symphony by G. Mahler (solo white voice). He has participated several times in the Gala Concerts of the International Festival of Operetta at the Verdi Theatre, the De Banfield - Tripcovich Hall and the Politeama Rossetti.

Remaining in the theatrical field, the choir participated in the Christmas play (nine performances) Child among childrencreated and directed by actor-director Mario Maranzana. Under the direction of Renato Sarti, he collaborated in the show The memory of the offence at the Risiera di San Sabba and as part of the Mittelfest he performed the operina Rayok by Schostakovich, directed by Moni Ovadia.

In 2009, in collaboration with the Teatro lirico G. Verdi in Trieste, it organised an educational project for schools in the city, staging The Small Chimney Sweep by B. Britten. The repertoire, in addition to opera-symphonic music, includes sacred and secular polyphonic music, ancient and modern, Italian and foreign folklore (performed in the original language), film music and musicals; many contemporary composers have written and dedicated their compositions to the choir.

In May 2017, he was involved in the creation of the work Brundibar by H. Krasa, a work composed for choir and treble soloists, at the Sala Victor de Sabata of the Teatro lirico G. Verdi in Trieste. In October 2017 he participated in the Symphonic Season of the Teatro G. Verdi with the premiere performance of Psalmus pro humana regeneratione by Marco Taralli and in December he was invited by the Munich Concert Society to give a concert in the Markus Kirche.

June 2018 saw the release of the CD Il Popolo felice with pieces by composers such as Kodaly, Britten, Bardos, Macchi and Sofianopulo, for a cappella choir, with piano and orchestra. The current discography includes: Carmina Burana by C. Orff (Velut Luna 1997), the Cantata of the Nativity of the Lord by G. Michelazzi (1999), International Folklore and Misa Criolla by A. Ramirez (1999), Concerto Celebrativo (2004), Christmas Concert for tenor, treble voices and orchestra (2005), Magnificat (2007).

The choir is prepared and directed by teacher Cristina Semeraro.