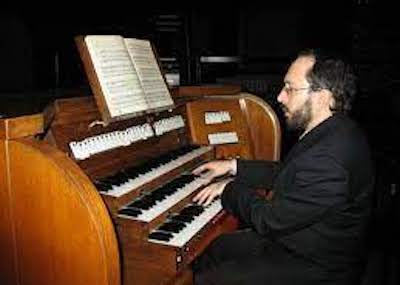 Paolo La Rosa, Composer, pianist, organist and choir conductor, he was born in Milan in 1971. He studied piano and then obtained diplomas in Pianoforte, Organ and Organ Composition, Choral Music and Choir Direction, Composition and the 2nd Level Academic Diploma in Composition at the Conservatories 'Antonio Vivaldi' in Alessandria, 'Luca Marenzio' in Brescia and the 'Giuseppe Verdi' Conservatory of Music in Milan, respectively. At the same time, he dedicated himself to the art of organ improvisation, studying in Lyon (F) with Maestro Franck Vaudray and attending almost all the Masterclasses organised by Sant'Eustorgio Musica, at the Church of the same name in Arcore (MI). He also specialised at the Conservatoire à Rayonnement Régional de Toulouse (F), attending CESMD courses with Maestro Michel Bouvard and Maestro Jan Willem Jansen.

He has participated in numerous Masterclasses of organ interpretation and improvisation in Italy and abroad, held by internationally renowned masters, subsequently winning several prizes in national and international organ competitions. He is particularly dedicated to choral and vocal composition by attending the European Seminar for young composers organised by the Feniarco in Aosta (2004, 2006, 2008), where he specialised with Maestro Jakko Mäntyjärvi and Vic Nees.

He is currently Principal Organist and Maestro di Cappella at the Church of Santa Maria del Suffragio in Milan. From 2010 to 2013, he served as Artistic Director of the 'Autunno Organistico Pavese' organ concert review, organised by the MusicalMente Association in Landriano. He has three organ CDs to his credit: the first dedicated to organ improvisation entitled: "EX TEMPORE MISSA NATIVITATIS', a musical journey through symphonic musical forms based on the melodies of Ambrosian chants, performed at the Costamagna Organ of the Diocesan and European Shrine of St. Michael the Archangel and St. Rita in Milan, released in December 2020 on the ClassicaDalVivo record label.

As a composer, he has won several prizes and mentions in national and international competitions:  First prize at the 3rd 'C.A. Seghizzi' International Composition Trophy in Gorizia, in 2006, where his composition 'Gorgée' was performed four times by choirs from the United States and Eastern Europe. In 2008, he obtained a recommendation and publication at the 2nd 'Bettinelli' Choral Composition Competition in Milan. Also in 2008, he received 3rd prize with honourable mention (first prize not awarded) at the Composition Competition "Missa Pueri Cantores 2008" of the Italian Pueri Cantores Federation. In 2008, the composition "Vol" for 8 solos and choir was a finalist and included in the regulations of the 48th International Choral Singing Competition "C. A. Seghizzi" 2009 as compulsory pieces for the contemporary music category.

In 2009 he obtained the 'honorable mention"at the Ars Phoné International Composition Competition in Termoli with the piece: 'Sepulture', for soprano voice, a study entirely dedicated to the voice and its potential.  In 2015, he won the overall gold medal in the composition competition organised by Choralnet.org: "Showcase Dare August 2015"with the composition for 4 soloists and mixed choir '...your Excellence'.

His compositions for choir and organ are published by Editions Preludio of Milan, Armelin of Padua, Ut Orpheus of Bologna, Ed. Feniarco, Edizioni Musicali Europee of Milan. The composition 'Gorgée', Ut Orpheus editions, was also broadcast by the Bulgarian National Radio in the programme dedicated to young composers: 'Europe is singing'.