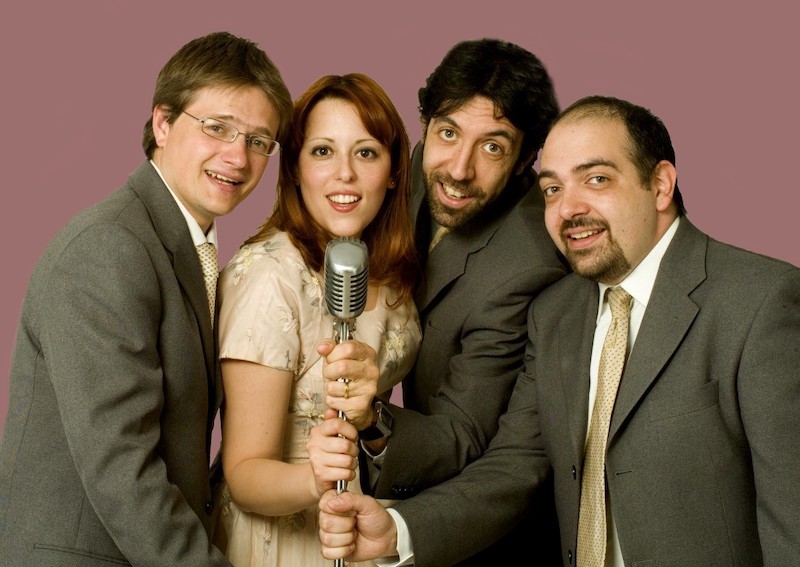 The Quarto Eccedente are established musicians from the Turin area with a shared passion for the brilliant sounds of the 1950s. Through swing and bebop, cha-cha-cha and revue, they faithfully re-propose the successes of the most famous Italian vocal quartet, keeping intact their ironic and elegant vein. In an interesting review, from "Il Visconte di Castelfombrone" to "In un palco della Scala", we go back in time to the days of E.I.A.R. and the great orchestras of Kramer and Angelini. The golden age of revue theatre, which with the Cetra Quartet gave birth to artists such as Macario and Wanda Osiris, comes back to life through the classics "Vecchia America" and "Un bacio a mezzanotte". In an amusing show, the audience moves casually from 78 rpm records to compact discs, delving into the history of Italy from the post-war period to the present day. Music and theatre thus merge into small scenic representations with which the Cetra embellish each of their performances, for a pleasant and relaxing evening. The Quarto Eccedente are Annalisa Mazzoni, mezzo-soprano, Pippo La Rosa, contraltist, Claudio Poggi, tenor and Davide Motta Frè, bass, who is responsible for the philological research work and the orchestral bases on which the group sings. It is interesting to note that the Quartetto Cetra songs are re-proposed with absolute fidelity of the vocal and orchestral parts. The Quarto Eccedente have performed in various theatres and events throughout Piedmont and in 2004 they won the Riccio d'Oro award as Piedmont's revelation group. Also in 2004 they successfully participated in two episodes of the successful programme Zelig Circus on Italia 1 and in 2005 they were chosen to perform the closing theme song of the programme "Palcoscenico" dedicated to the Cetra Quartet on RAI2. Since 2007 they have been collaborating with the historic Lombardy broadcaster Antenna3 (with whom Tata, Lucia, felice and Virgilio performed for over a decade), in a programme that compares the original performances of the four Cetras with the new interpretations of the Quarto Eccedente.