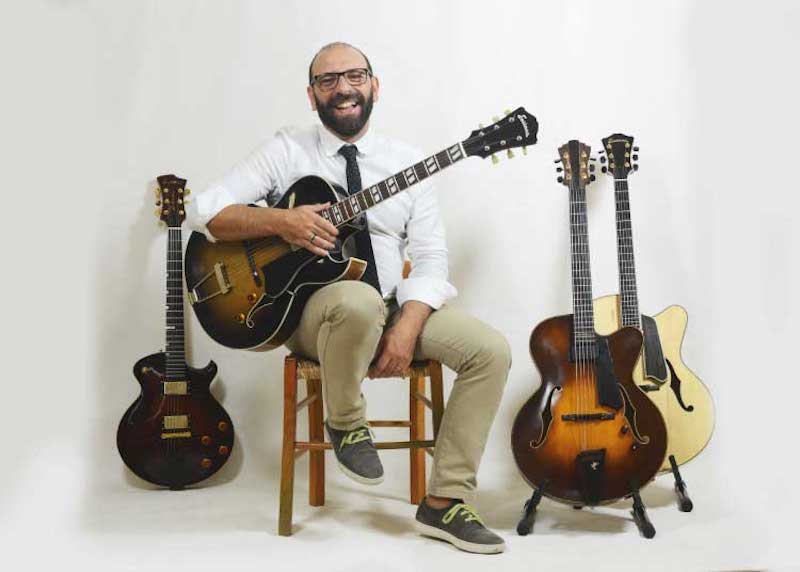 Born in Matera on 09/07/1972. He has a degree in Modern Literature from the University of Bari and a diploma in guitar from the 'E.R.Duni' Conservatory of Music in Matera. He began studying the guitar at the age of nine, studying jazz at a public school in Matera. In 1987 He founded Meridiana Group, with which he gave concerts in Italy and abroad and with which he recorded four CDs. In 1989 he completed his studies at the Berklee College of Music in Perugia, where he was admitted to the advanced level of studies under the guidance of Jim Kelly e Donovan Mixonand with Pat Metheny in 2003.

He deepened his study of composition with various teachers and took part in numerous Master Classes. 2004 the Master Class in Arranging and Composition held by Maestro Larry Blank, already well known to the public as an arranger and orchestrator of popular films and musicals (cf. Chicago, Evita, South Park and many others), has held various seminars in secondary schools and conservatories, both as a teacher and as an assistant, working with Ettore Fioravanti seminars on improvisation at the Conservatory of Matera.

In 1994 joins the UTOPIA ORCHESTRA (an orchestra of thirty musicians from different parts of Italy) conducted by Bruno Tommaso. In 1995 performed concerts throughout Italy with a project of the Meridiana Group entitled Tierras Templadas, presenting to the public and critics the group's first recording: Sole Novo. Also in the ’95 Meridiana Group also played in the review held in Matera, organised by CAM Centro Associativo Multimediale), entitled SPAZI CONFINATI, presenting a programme including traditional Lucanian songs arranged for jazz quartet.
In 1995 participates in internationally renowned festivals such as: 'TIME IN JAZZ' in Berchidda (with Utopia Orchestra e Paolo Fresu Sextet), in a special project called 'Narat Babbai' (poetry and music for the Pietro Casu) and "RUMORI MEDITERRANEI" from Roccella Ionica (with Orchestra Utopia and Paolo Fresu Sextet). In September of the same year he played in Partinico (Palermo) for the live soundtrack of the silent film "IL FIGLIO DELLO SCEICCO" starring Rodolfo Valentino (with Orchestra Utopia). He has participated in numerous Italian jazz festivals, including: "JAZZ & CO" in Como; "Eddie Lang Jazz Fest" in Monteroduni; "Summertime IN JAZZ" in Prato, "GEZZIAMOCI" in Matera for six editions, including that of '96 (with names such as P. Erskine, T. Gurtu, T. Harrel on the bill). And again Syracuse; Augusta; Milazzo; "MUSIC INN" of Rome; "FESTIVAL INTERNAZIONALE DI NOCI" (with the Utopia Orchestra, Evan Parker, Pino Minafra, G.L. Trovesi, M.Orselli and others); F ONDAZIONE N.PICCINNI of Bari, Cologne (Germany), ANTIPHONAE of Martina Franca (Ta) and others. He played at a study conference entitled: "Jazz: experiences in the south" and at the gathering of Italian orchestras in Campobasso.

In 1996 writes the music for the show dedicated to the poet of Lucanian origin Michele Parrella, organised by the ARTErìa Association. The travelling show involves important personalities of Italian culture.

In 1997 held a series of lessons on improvisation and analysis of jazz styles (from the origins to 'consumer' music) at the Conservatory of Matera and other schools. In the same year he conducted the Conservatory's Big Band during the Music Festival and gave lessons in professional training courses organised by the Basilicata Region (CEE) for wind and percussion orchestra (L.A.M.S. -Montescaglioso).

In 1998 He wrote the music for the play Racconti Senza Respiro, by actor and director Massimo Lanzetta, held in Portici (Naples). In the same year he was among the coordinators of the 1st Chamber Music Festival of the School of Arts organised by Arterìa, also as a musician in chamber ensembles.
In 1999with the Meridiana Group, gave a concert for the Italian Embassy in Cologne.

From 2001 collaborates assiduously with the Centro Danza school of choreographer Mary D'Alessio. Together they participate as guests in festivals, exhibitions and cultural events, promoting an itinerant show that blends their original music with classical and contemporary ballet. In April 2003 plays, with the Nova Jazz Quartet, in the Italian jazz guitar festival at the 'Taylor' in Bitritto (BA).

In September 2003 plays in two concerts at the 'GEZZIAMOCI' Festival 2003"guest of the double bassist G. Maierand of Ettore Fioravanti & Belcanto Group. In March 2004 participates as a guest of the duo Gabriele Mirabassi/Luciano Biondini at the Festival "IL CALORE DEL JAZZ" held at the Teatro Rossini in Gioia del Colle (Ba).

In August, he plays at "GEZZIAMOCI 2004"with his new project Il Canto Passato with G. Mirabassi and L. Biondini. His music is often used for documentaries, short films, cd roms (Viaggio nelle terre dei Lucani, Omaggio a Giacomo Manzù, Le terre del silenzio, I cavalieri della Bruna, Matera 2 luglio, etc.), TV programmes on Telenorba (Calci&Carezze, Manuel&Kikka, Il condominio dei veleni, Mudù, etc.), on Rai 3, SKY (Barz_Uccio Desantis), etc.
For nine years he taught jazz guitar and ensemble music at the Onyx Jazz Club school in Matera, at the Scuola delle Arti in Matera and in other schools in Puglia. He has also taught at the Istituto Tecnico Commerciale "A. Loperfido" in Matera in an experimental course of guitar and ensemble music promoted by the Ministry of Education.

He has been interviewed by a specialised magazine: "Tutto chitarre" in a special report on ten Italian guitarists and by AXE MAGAZINE in a report dedicated to his music and his CD INTERACTIONS released by EmArcy/Universal. Specialised magazines have written about him, including: Corriere della Sera, Repubblica, Jazz Hot!, Chitarre, Guitar Club, Ritmo, Tutto Chitarre, Gazzetta del Mezzogiorno, Jazzit!, Jazzitalia, Liberalia, Jazz Convention, All About Jazz and other national and local newspapers.

He has given classical music concerts with Duo Carulli (guitar and piano) and with Lucano Quartet (guitar quartet).

He teaches guitar at the "G. Pascoli" secondary school in Matera. He collaborates as a music critic with the magazine Liberalia, with the jazz portal Jazzitalia and Jazz Convention.
He has collaborated with Jazzit magazine.
He is also the author of the book Egidio R. Duni-Duny between Italy and France published by Altrimedia_Matera/Rome.