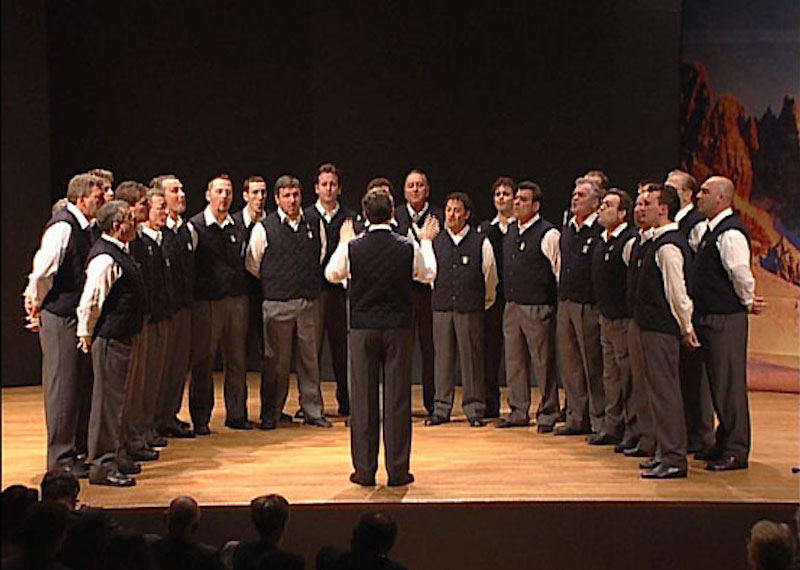 On the slopes of Mount Fravort, at the gateway to the Lagorai alpine group at 1451 metres above sea level in eastern Trentino, there is a small church dedicated to St. Oswald, in ancient times guarded by a hermit, and built on the hill overlooking the town of Roncegno Terme (TN). During the First World War, the hill was the scene of a bloody and long battle between the Italians and the Austro-Hungarians for the dominance of an area considered strategic by the belligerents. The S. Osvaldo Choir of Roncegno Terme (TN), founded in 1968 by a group of friends from the village of Roncegno, takes its name from this church. The first maestro and soul of the choir was Dr. Primo Martinelli, a doctor in charge of Roncegno Terme, who passed the baton to Maestro Carla Mosca, who directed it until 2000.
The choir has been organising a festival of folk and mountain songs for 35 years, in the setting of the Salone delle Feste of the Palace Hotel Terme di Roncegno. Over the years it has participated in numerous concerts and festivals in Italy, holding concerts in all the major cities of northern Italy.
Abroad, to be remembered are trips to Yugoslavia (Bosnia) in Stivor in 1977, to a village of emigrants from Trentino, to Holland, Germany, Switzerland, Austria, the Czech Republic and Wales. The S. Osvaldo Choir has also performed in Croatia, Bosnia, the United States, Canada and recently in Hungary. The choir's repertoire, in addition to classic alpine choral songs, includes songs by authors and pieces of historical research into the musical culture of Trentino and beyond. The choir has been directed since 2001 by Maestro Federico Bonato and consists of 33 members. Mr. Dario Betti has been President for 20 years.