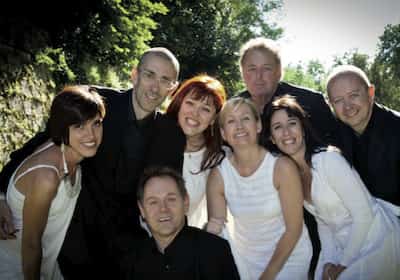 VOCAL COCKTAIL is an a cappella vocal group founded in 1995 under the name of Gruppo Vocale Ansibs. The repertoire ranges from vocal polyphony to classical instrumental music, from traditional music to light music and jazz, with a constant search for arrangements written specifically for solo voices. Over the years, the group has performed in Italy and abroad (Slovenia, Spain, Croatia, Germany), also with various instrumental ensembles (in particular, the Bach project in which they performed with double bass and drums in a jazz reinterpretation of the instrumental classics of J.S. Bach). He has taken part in various national and international competitions, including the 1st international competition "Le nuove frontiere della polifonia vocale" in Varese, the international competition "Musicworld" in Fivizzano (MS) and the international competition "C.A. Seghizzi" in Gorizia, where he won the "Premio del pubblico" in the light music and jazz category. He also took part in the 10th and 12th editions of "Corovivo" (in 2005 and 2009 respectively), winning in both cases the "fascia d'eccellenza". In 2008 he took part in the world premiere of the monodrama "La variante di Luneburg", which debuted in the theatrical version in Gorizia with Milva in the main role, and in the same year he made his theatrical debut with the play "A come . . .", based on an idea of the Ansibs Vocal Group and directed by Luisa Vermiglio. In 2009 and 2010, the group was involved in organising a seminar on light music held by the teacher Jonathan Rathbone (musical advisor and director of the Swingle Singers from 1984 to 1996). In 2012 the group recorded its first CD, also titled VOCAL COCKTAIL, which traces in 11 songs the history of the group from 1997 to the present day. To coincide with this important event, the group - with a new line-up and a new repertoire - has decided to change its name as far as its concert activities are concerned, so all information and concert updates can be found at www.vocalcocktail.it. The Ansibs cultural association, on the other hand, will remain active and connected to cultural activities only, and all information on the organisation of courses, events, exhibitions, dissemination, etc., can be found at www.ansibs.it