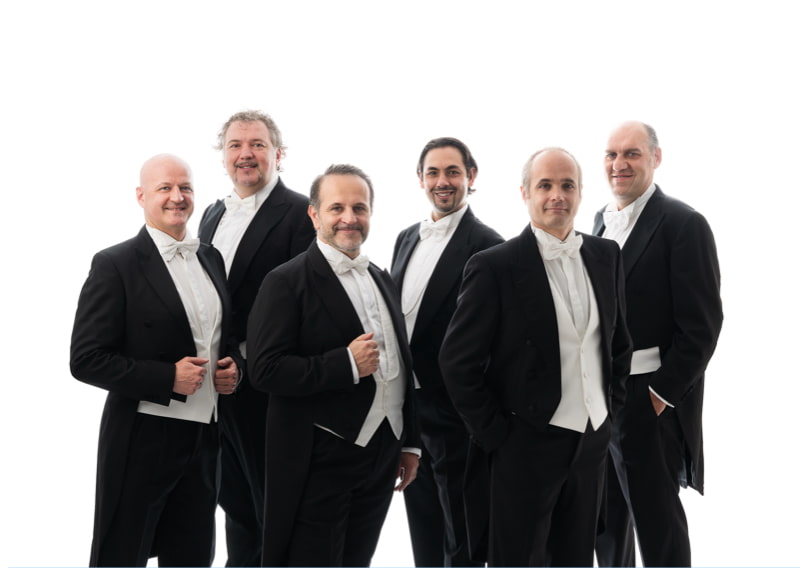 The project to revive a quintet of harmonised male voices, accompanied by a piano, was born in 2003 on the wave of a fortunate intuition of Andrea Semeraro. Comedian Harmonists (a vocal group that had a dazzling but short-lived international career in the 1930s due to the racial laws that affected half of its members) also found 'fertile ground' in other friends and colleagues at La Scala, and in a short time the contagion was total.

After an artistic start that was intended as a musical and stylistic re-evidence of the great successes of the German founders, the Italian Harmonists (the name chosen was intended as a clear homage) decided to extend their repertoire by revisiting some of the most beautiful Italian songs that, at the turn of the 1930s and 1950s, made the "radio years" memorable, and this thanks above all to the unquestionable skills of pianist Jader Costa as a musician and arranger.

From that moment on, as increasingly clear evidence of the project's worth, the group's activity is a succession of successes and gratifications: the recording of the first disc(When the radio...), the allocation of the Carosone Award 2007 (thanks to a personal reinterpretation of the classic Three Lotto numbers(performed at the Arena Flegrea in Naples on 21 September) and a memorable performance at the glorious Derby Theatre Milan, a historic stage on the Milanese theatrical-musical scene.

We were on the right track, and in 2008 the group crossed the threshold of Sala A in Via Asiago in Rome to perform the entire show live on RAI Radio3. When Radio... for Radio3 Suitewhose success led to an invitation to repeat the event at the Cappella Paolina in the Palazzo del Quirinale, on the occasion of the The Quirinale ConcertsThe event will also be broadcast live on RAI Radio3 and on the Euroradio circuit.

In the years that followed, the group's concert activities took it to various cities and provinces in Italy (Bolzano, Trapani, Cremona, Messina, Savona, Palermo, Trieste, Turin, Ravenna, Pavia), not forgetting, of course, Milan, where it is proud to recall the sold out in the temple of jazz: the BLUE NOTEwith a memorable evening in April 2011.

Significant appearances also at congresses and conventions, such as participation in the BEA (Best Events Awards) 2012 at the Milan offices of Sole24Ore.

In 2013 a prestigious award: the SILVER MEDAL of the Lombardy Region, "For having been able to combine theatrical irony and vocal flexibility with technical rigour and scrupulous preparation, creating a musical project that for almost 10 years continues to establish itself as unique in its genre".

2016 is the year of the artistic and musical turning point: a demanding vocal challenge, made up of pieces from the opera/symphonic repertoire, always performed with the help of just voices and piano.

The great classical, romantic and modern composers, such as Boccherini, Rossini, Schubert, Verdi, Brahms and Puccini, the great lieder pages, the intermezzos, the overtures and the most evocative pieces from the most famous operas, now find their place in the new Classicheggiando.