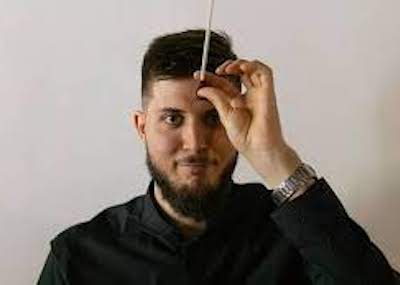 Gianmarco Scalici was born in Verona in 1997. At the age of 10, he undertook the study of the violin, which he later continued at the Conservatorio di Musica 'E. F. Dall'Abaco' in Verona, under the guidance of A. Martini and A. Ambrosini. He approached composition as a self-taught musician, and since 2015 has been following F. Zandonà's courses at the Verona Conservatory. He currently attends the Conservatorio 'A. Pedrollo' in Vicenza, where he studies conducting with G. Andretta and composition with E. Pisa. He has won several composition competitions including: In 2017, 1st prize in the original composition category and 1st prize overall at the "Adriatic LNG" competition in Rovigo, with "Fantasia Cromatica" for guitar. In 2017, 1st prize in the internal competition at the Conservatorio "E. F. Dall'Abaco", with "Heut triumphieret Gottes Sohn" for ensemble. In 2016, 1st prize ex-aequo in the original composition category at the "BPV" competition in Verona, with "Preludio - Corale" for string trio and piano. In 2016, 2nd prize in the category reworking of an author's piece at the "BPV" competition in Verona, with "Sei piccoli pezzi" for string septet and wind instruments. He has collaborated as composer, arranger and orchestrator with various vocal and instrumental ensembles, including Interpreti Italiani, Insieme Corale Ecclesia Nova, Coro Maschile La Stele, Coro dell'Accademia Musicale di S. Giorgio in Braida, Orchestra and Chamber Choir of the Conservatorio di Verona.