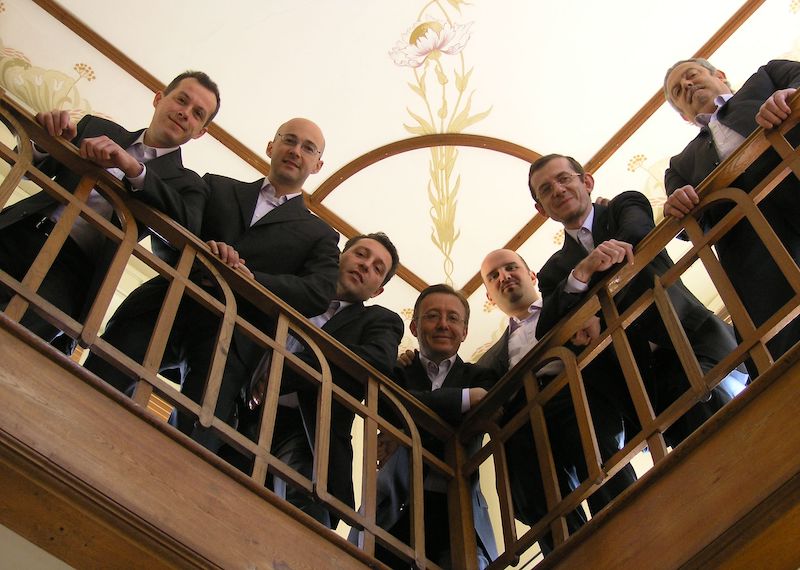 The vocal a cappella group VOCEVERSA was founded in Biella in the autumn of 2002. It was born from the encounter between people with a great passion for singing, who were already active in the traditionally rich choral scene in Biella, with around twenty vocal groups scattered throughout its small territory. After a number of changes in personnel, the group has now grown to its current line-up of seven male voices: Carlo Cavagna (bass) Alessandro Oliaro (bass) Carlo Maffei (bass) Simone Bocca (baritone) Roberto Marinone (tenor) Alberto Servo (countertenor) Mauro Fosci (countertenor) In the two-year period from 2005 to 2007, the seven-member ensemble increased to eight, thanks to the contribution of Andrea Pilati, and later (in 2008), due to temporary repertoire requirements, it was joined by sopranos Akiko Yonezawa and Daniela Bocca. REPERTOIRE AND ACTIVITIES The VOCEVERSA repertoire covers a period of time from the Middle Ages and the Renaissance to the present day, touching on very different styles and cultural matrices, but without forgetting the popular music that is the common root of the choral experience of the group's members. The group's activity also focuses on the study of vocal techniques in order to take care, on the one hand, of the sound emission of each single voice and, on the other, of the construction of a specific ensemble sound. BRIEF HISTORY As mentioned above, the vocal a cappella group VOCEVERSA took shape between 2002 and 2003 and began its concert activity in 2004 with its public "baptism" in August in Frasso, a hamlet of Scopello (VC). In the same year the group took part in the travelling theatrical performance "007 Opera-zione Bond-a" organised by the cultural association "Ars Teatrando" of Biella. The group also took part in the celebrations for the 110th anniversary of the Italian Touring Club in Biella, and began its link with Camburzano, the town where two of its members live, with a concert in the church of San Martino, once again in collaboration with some of the actors from the cultural association 'Ars Teatrando' of Biella. In 2005 the group took part in the 23rd edition of the prestigious International Choral Singing Festival organised by the friends of the Zumellese Chorale of Mel (BL), which over the years has seen the participation of choirs and vocal groups from all over the world. In July of the same year, VOCEVERSA was selected (together with eight other vocal groups from Germany, France, Austria, Hungary and Slovakia) for the Master Class for a cappella vocal groups organised as part of the Schleswig-Holstein-Musikfestival in Lübeck, Germany. The Master Class, which takes place once every two years, features the English vocal ensemble King's Singers, internationally renowned performers of a cappella vocal music, as guest teachers. At the end of the event, together with the other vocal groups and the King's Singers, they took part in the final concert, held in the concert hall of the Conservatory where the master class had just taken place. In 2006, the ensemble was fortunate enough to participate in the 17th Miskolci Kamarakorus Fesztival, held in Miskolc (Hungary). On this occasion its performance at the Bela Bartok Conservatory was also broadcast by the Hungarian radio station Magyar Radio. The participation in this important event was repeated in 2007; in this case the group performed on the final evening of the event, held in the Minoritas Templom in Miskolc. To consolidate a long-lasting artistic relationship, in 2007 the group also collaborated with the theatre workshop A.R.S. Teatrando of Biella, performing on various evenings, from Camburzano (BI) and Biella to Crevola Dossola (VB) and Turin, the show "Ti scrivo, e canto...", a theatrical tale in which the acting of the narration alternates and intertwines with songs from VOCEVERSA's repertoire. In 2007-2008 the group continued and strengthened its relationship with the Mod.A.I. Institute, following its vocal technical course, and had the opportunity to perform during the course at a specific seminar on the study of vocal emission and singing. During 2008 and 2009, VOCEVERSA and ARS Teatrando staged the show "Concerto Sconcerto" in the prestigious concert hall of the Raphael Health Centre in Roncegno Terme (TN) on the occasion of the 40th anniversary of the foundation of the local S. Osvaldo Choir and again in the small Regina Margherita Theatre in Piedicavallo (BI). In the same period they also performed the show "Ti scrivo e canto" as part of a series of initiatives in the context of the "Year of Solidarity", an event that covered the whole of 2008 through various initiatives, organised in Trivero (BI) under the patronage of the Piedmont Region, the Province of Biella and local authorities in the Biella area. Between late spring and summer 2008, the group had the opportunity to record its first CD, simply entitled "Voceversa". It contains the main songs that have made up the repertoire of the group over the period of time since its early beginnings, as a tribute to the work done and the many pleasant moments spent. The recordings took place in the "Santa Maria Assunta" church in Bioglio (BI). In March 2010 VOCEVERSA returned to visit their Hungarian friends in Miskolc and took part in the Miskolci Kamarakorus Fesztival, now in its 22nd year. In the same year they took part in the International Festival in Mel (BL), where they were invited to perform with the renowned Philippine Madrigal Singers. In July 2011 the group took part in the 50th edition of the prestigious Seghizzi International Choir Competition in Gorizia, winning the Feniarco special prize as the Italian group with the highest score and placing in the third place bracket in the two categories in which it participated. During the course of 2012 the group, together with three other ensembles, will take part in a workshop organised in Perugia, with Philip Lawson, arranger and composer, but above all first baritone for almost twenty years in the King's Singers, as an exceptional teacher.