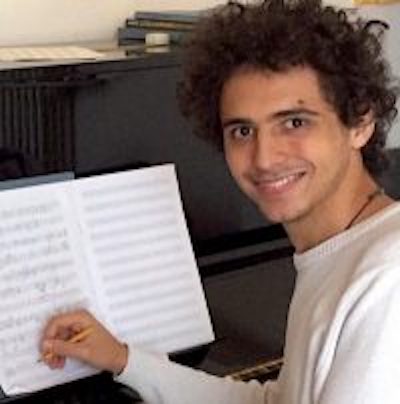 Edward Clavenna was born on 7 June 1995 in Milan. At the age of 8, he started taking lessons in solfeggio and saxophone at the band in Arese, where he lives.

In the 2012-2013 school year, he was admitted to the Scuola Civica di Musica Claudio Abbado in Milan under the guidance of M° Mauro Cassinari, with whom, in July 2017, he obtained his Level I Diploma in Saxophone with top marks and honours. He attended the masterclasses of M° Francisco Martinez and M° Mario Marzi: thanks to the latter, in July 2015, with the chamber orchestra Musici di Parma, he played the Concerto for saxophone and strings by A. Glazunov.

In May 2016, he played, in duo with pianist Emanuele Abram, at the Museo teatrale della Scala. In April 2017, in duo with the pianist Matteo Silvi, he was runner-up at the8th Salieri Prize International Competition.

At the same time, he began studying composition under the guidance of Giovanni Verrando first and then Paolo Coggiola at the Scuola Civica di Musica Claudio Abbado, where he is currently enrolled in the three-year AFAM Composition course.